Shreya ChauhanUpdated on Aug 22, 2020, 15:53 IST
Highlights
He reportedly tried to swim back to shore, but was halted by exposed 20mph winds and enormous waves crashing well over his head.The man believed to be in his thirties then started to shout for help and wave.

A video of a dramatic rescue of two people who were drowning has gone viral. Beachgoers formed a long human chain to drag the two out to safety.?

One swimmer had been in the water just off a Dorset, England beach when he began to struggle against the tide. He reportedly tried to swim back to shore, but was halted by exposed 20mph winds and enormous waves crashing well over his head. 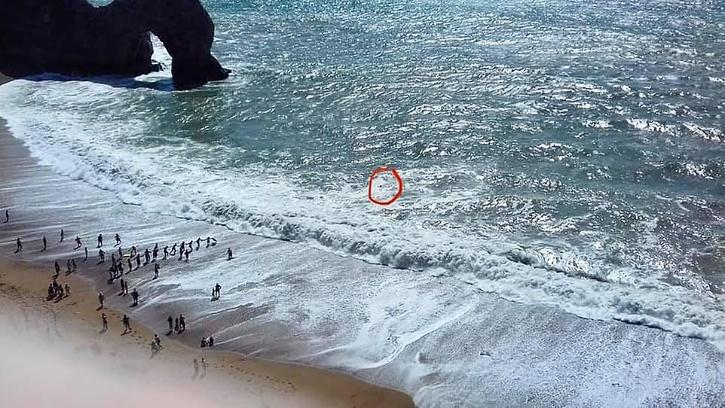 The man believed to be in his thirties then started to shout for help and wave. Immediately about 30 people rushed to water’s edge with their arms linked to rescue the man.?

Initially the rescuers tried to throw a body board and a lifeguard's rope out to him.?In one attempt, a beachgoer tried to run to the man himself but he was also blown by the wind.?

After sometime those forming chain were able to reach both and brought them safely back to the beach.?

"We got there at about nine in the morning and this guy had been in and out of the water quite a few times throughout the morning. He seemed to know what he was doing and was probably about 50ft out for the most part,” Lad Bible quoted an eye-witness Emily Foote, a teacher from Bridport, Dorset as saying.?

Also Read:?Rescuers Save Boy From Drowning In Underground Cave, One Held Onto His Hand Through Hole In The Ground? ??

?"At around midday the winds picked up and that's when he started struggling. He managed to get closer and was pretty much just at the point where the waves broke but he couldn't get back. Loads of people just sprinted to the sea and formed this chain but they were being battered by the waves too,” she further said.? 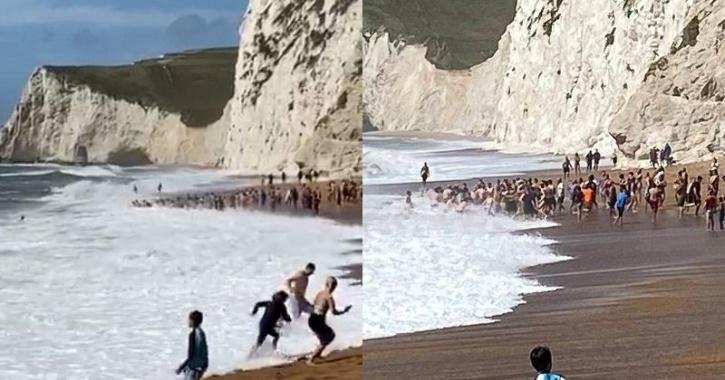 Talking about the other guy she said, "They tried throwing things out to him but they kept being blown back and one guy even attempted to run straight to him with a buoyancy aid on a string. He ended up going under the water himself and had to be rescued as well as the swimmer. People kept being knocked back and by the end there were probably about 30 people trying to help. With every attempt they got a little bit closer and were finally able to reach him.”

Everyone applauded when the men were rescued. The two didn’t require medical attention.?